The Johnson-Lindenstrauss lemma for the brave

If you are interested in dimensionality reduction, chances are that you have come across the Johnson-Lindenstrauss lemma. I learned about it while studying the Linformer paper, which contains a result on dimensionality reduction for the Transformer. Essentially, they prove that self-attention is low-rank, by appealing to the Johnson-Lindenstrauss lemma.

Online, you can find many elementary proofs of this lemma. Unfortunately, most of them have sacrificed some intuition and generality in order to simplify the proofs, for instance by using Gaussian distributions. I was left a bit unsatisfied by this, so I started to study the proof in the original paper 1. According to the eponymous authors, the lemma is "a simple consequence of the isoperimetric inequality for the \(n\)-sphere". But what does that mean? That is the content of this post.

Statement of the lemma

The formal statement of the lemma goes like this.

Like its many adaptations, the original proof is probabilistic. That means that the strategy is to show that a random \(L\) (sampled from a suitable space) satisfies the (relaxed) statement with nonzero probability. Therefore, there must exist one. A tighter estimate for the probability is nice to have, because this will give an estimate of how quickly you can find a suitable witness. It turns out that you can actually find one in randomized polynomial time, which is reassuring for applications in computer science.

Besides presenting the original proof, I will derive an explicit witness \(K\). Such a witness is not given in the original papers (at least not one that works for small \(N\) also). To obtain a reasonably low value for \(K\), I did some of the estimates differently. This value is nice to have because there are different ones around in literature, and not all of them apply to the lemma in the form stated here (see also the remark at the end). I do think there is room for improvement in the value I'm getting currently!

Summary of the proof

Before we dive in, we can summarise the structure of the proof in the following steps:

To make the proof more accessible, I have replaced all measure-theoretic notation by the more intuitive probabilities or (normalized) surface area. For measurable subsets \(A \subset S^{n-1}\) of the \((n-1)\)-sphere I denote their normalized 'surface area' by \(\text{vol}_{n-1}(A)\), referring to the unique rotation invariant normalized (or probability) Borel measure on \(S^{n-1}\). But you can think of it as surface area on a sphere.

Namely, although there is no standard notion of random matrix, there is a canonical choice of random orthogonal matrix. Recall that a matrix \(U\) is orthogonal if \(U^TU = UU^T = 1\). These are the linear operations on \(\mathbb{R}^n\) that preserve inner products. They can be thought of as compositions of rotations around an axis and reflections along an axis. And it turns out that there is a well-defined and unique notion of random variable with values in \(O(n)\), satisfying some nice conditions. For instance, this notion of randomness is invariant along postcomposition with a fixed orthogonal transformation. The mathematical reason behind this is that \(O(n)\) forms a compact Lie group on which there is a unique normalized Haar measure. But for the rest of this post, we will only need the fact that orthogonal matrices can be sampled and that they enjoy rotation invariance.

We can use this to obtain a notion of 'random rank \(k\) projection' matrix \(L\) as follows. Suppose \(U \in O(n)\) is a random orthogonal matrix. Then define \[ L := U^TQU \] where \(Q\) is the projection on the first \(k\) coordinates. That's it! Note that not all matrices have this shape. But to find a matrix, we will see that it is enough to sample \(L\) in this way. We can now take our problem to the unit sphere.

Seminorms concentrated near their median

The function \(r\) defined above defines a seminorm on \(\mathbb{R}^{n}\). The precursor paper 2 proves an interesting property about (semi)norms that satisfy \(r(y) \leq b \lVert y\rVert\) for some bound \(b\), like our \(r\). Namely, their value for random vectors on the unit sphere is increasingly concentrated around their median as \(n\) increases. 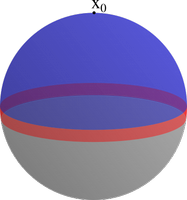 The next section gives another estimate for the expected value of \(r(y)\).

A further two-sided estimate for the average of \(r(y)\)

As a bonus, we also see that a suitable \(U\) can be found in randomized polynomial time, since the right term in the estimate is \(\leq O(1/N)\) under this condition.